It started with such an innocent accident. An issue that doesn’t even make the top 20 on a given day as Program Manager; a key broken in its lock. On this day however, another much larger problem was uncovered.
As Miguel, our neighbourhood handyman, unsuspectingly removed the screws holding the roofing in place – his attempt to break into the locked classroom – he came across something unexpected. A colony of winged friends. Hysteria ensued and the usually tough Miguel was reduced a crouching shadow behind the children’s desks.
Cue the 1960’s Adam West batman music.
The children called them butterflies and the teachers called them a deal breaker but everyone knew that the bat problem needed to be remedied.
Miguel, along with a few scholarship mothers, proceeded to “deal” with the new bat problem in a way sure to please even the most ruthless of bat-villains.
“WHAM!” – “BIFF!” – “KAPOW!”
All possible entrances and escapes were cemented and we then went to work on the drop ceiling. As we uncovered what appeared to be the outhouse of every bat in Honduras, we also found two stragglers that apparently never received the notice of eviction.
“Mister, lo va a matar usted!” – Mister, you are going to kill it!
I must confess I didn’t know if I was up to the task, but I couldn’t afford to lose face. I grabbed the closest broomstick, climbed the rickety ladder and took my best shot … I missed and the bat flew off (I swear I heard it chuckle).
As I climbed down the ladder in defeat, Miguel, laughing with great enjoyment, went to work on the lone survivor … and Miguel doesn’t miss.
The bat went crawling across the drop ceiling and popped out right in front of me.
Perhaps it was instinct, perhaps some Latin machismo had rubbed off, or maybe it was my tee-ball training, but without even realizing that I was still clutching the broom handle I took a swing. Bat connected with Bat and another day’s history was written for SJBS.
I could tell Miguel was proud, but my inner child recoiled. A small price to pay for some cross-cultural bonding time. I was always partial to Superman anyway. 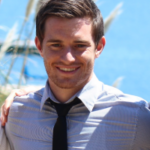 Since joining the BECA team in 2011 as a volunteer, Sean has gone on to work in many roles during his time with BECA. During his first two years in Honduras as a classroom teacher, apart from committing himself to making education fun and successful for every student, Sean worked to help develop and implement BECA’s math curriculum. During his third year in Honduras as Program Manager, he enjoyed championing the 2013/14 volunteer staff to a successful year while leading improvements at BECA's largest school, San Jeronimo Bilingual School. Sean brings years of experience and dedication to the role of BECA's Executive Director, providing oversight and leadership to BECA's programs.

Raised in Victoria, Canada, Sean graduated with distinction in Mechanical Engineering from the University of Victoria in 2009. He enjoyed a successful academic and professional career focusing on sustainable energy solutions before transitioning into his current work in International Development.