Teaching 25 small children English for seven hours a day in a hot classroom where tears and didn’t-quite-make-it-to-the-bathroom moments are not infrequent is stressful in itself. I’ve had students spin around in a circle so fast that they throw up at snack and students wet their pants back-to-back in the middle of a math lesson. But sometimes the most stressful part of my day isn’t teaching a student how to say fifteen instead of fixteen; it’s after school on days when I have a little thing called cooking team.
Our team in Cofradia is divided into four cooking teams for Monday-Thursday, meaning that I only have to cook once a week. Which also means when my team cooks, we cook for over 20 people. Yikes.
With a budget of $1 per person, we head to the market around 4 pm on Wednesdays with a recipe in mind. We can find a pretty good selection of vegetables—normal things like onions, potatoes, and broccoli and some unfamiliar things like the indescribable prickly squash like pataste. We’ve got some options for cheese (though definitely funky) and there are plenty of rice, pasta, lentil, or chickpea options. Meat, however, is usually not in our budget and this is something Hondurans have a hard time grasping. “You don’t eat meat? Are you a vegetarian?” No, we just usually can’t afford it.
I see no less than 3 students at the market before we head over to the volunteer house to start our operation, with the clock ticking. The greatest hit my team has had so far this year was eggplant pizzas; that is, slices of eggplant we bought the weekend before in San Pedro topped with pizza sauce, peppers, onions, and quesillo (that funky cheese) baked in the oven. Sounds pretty easy, right? But all that chopping and slicing really does take up two hours. We had one person chopping the eggplant, another one working on snapping of the ends of green beans for a side dish, two people dicing tomatoes for the sauce, and someone else cutting up 20 bananas for a fruit salad.
The thing about team dinners and cooking teams is that, while they can be extremely stressful (have you ever seen the look on 20 hungry volunteer teachers’ faces when you say dinner will be late?), it’s also a nice time to hang out with people you don’t always get to hang out with. Between two different schools and three different living situations, there are some volunteers I don’t see or talk to often. I love having teachers from SMBS on my team, so I can hear how their days went over in Vida Nueva, and the middle school science teacher, who tells me stories of older kids who can hold conversations with you about chemistry and never tearfully ask why they have to go to school.
During dinner we get to hang out as always (and the house has hammocks—score!). After dinner it’s clean-up time, which includes many dishes to be washed, counters to be wiped off, and a floor to be swept and cleaned. When all that’s said and done, I head back to my apartment with a full stomach and not a lot motivation to do anything but shower and fall asleep with the happy thought that cooking team is over for this week. 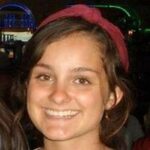 After a year full of singing the ABC song daily, bathing in glitter and glue, and dancing embarrassingly in front of her students, Raven is excited to return to San Jeronimo. She will teaching Prepa, following her class from Kinder, and has great hopes that there will be far fewer tears on the first day this time around. Before coming to Honduras, Raven studied Creative Writing and Spanish at Missouri State University, where she also had the opportunity to study away in San Juan, Puerto Rico. She has plans to attend graduate school for Latin America Studies after her time in Honduras and continue learning about the people and culture of the area. In the meantime, she hopes to help her students transition into the full school day, begin to read, and learn to say her name correctly. She's especially looking forward to spending time with her twenty-five small friends and their families come August.