The Absolute Anarchy from Day of the Children

The Absolute Anarchy from Day of the Children4 min read

“How long before a 9-year-old suffocates under a pile of children?”
That’s my first thought as my students tackle the young boy in the center of my classroom.
Second thought: “Only Kevin could incite such a rock star mosh pit of pouncing 4th graders.”
It’s the start of Día del Niño, a Honduran holiday that share a lot in common with Lord of the Flies. Teachers wear pipe cleaner costumes, students run amok through games, and free candy falls if you hit it hard enough with a stick. After just two weeks of training our students to respect our rules and procedures, we the teachers are rewarded the prize of anarchy. Who could take me seriously shouting in this Fantastic Mr. Fox mask anyway?
Kevin’s surprise reunion only amplifies the hysteria. Just a few weeks earlier I was devastated by news that he, one of my most flamboyant students from last year, wasn’t coming back. His family decided to move him into the public school, located literally on the other side of our school’s fence. It had been a roller coaster year for Kevin. One that, coincidentally, started at last year’s Día del Niño right here at Santa Monica. That was the day his mother left without warning for Mexico, taking his baby brother, but leaving Kevin behind. With his father long out of the picture, Kevin moved in with his grandmother and stayed at our school.
As anyone would expect, Kevin struggled all year with his emotions, academics, and behavior. His family stress only made things worse, and he became the frequently erupting volcano of my classroom. Still, when he wasn’t throwing a tantrum, Kevin seemed less volcanic and more like a big, bursting teddy bear smothering everyone in unrelenting hugs. The kind of kid you can always count on to scream the national anthem, share entire watermelons, and pull off Santa Claus costumes no problem.
Flash back to the present as Kevin, a beaming lighthouse of happiness, is the center of attention as we move outside to our first game, a music chairs with cup grabbing. Of course this is Honduras so there’s no music ready, but we improvise by banging a rock and a chunk of percussive metal from the nearby construction pile. The children circle like vultures listening for the clanking to stop. That’s not easy in a school yard audibly combusting with three-legged races, loud limbos, and hooting hoola hoopers. Sort of like a track meet Dr. Seuss would design.
At another station my students rest to write their dreams. Some want to be doctors, teachers, or even football players. Others want to be ninjas, kill zombies, and even a car. Hey, dream big or go home. Kevin writes “police” and I tell him we could use more who give hugs like his. Whatever he wants to do, it’s bittersweet knowing his dream is much more difficult without our school in his future. His public school crams 40-50 students in every classroom, twice the size of my class. It also offers no resource teachers for low students like him and, most important, there’s no English, the golden ticket for anyone hoping to escape this dirt-poor poverty.
“How do you like your new school?” I ask him. “No don’t like,” he mumbles. I have so many questions, but I bottle them up. I know he’s going back there tomorrow and there’s nothing I can do. Let’s just enjoy today.
Then suddenly, a spontaneous luau, rubber ball fights, and my mind shifts back to my current 21 students, some of them ferociously hammering their newly gifted shoes on metal benches in a piñata protest.
Finally those paper mache punching bags are ready. One at a time I watch students from all six grades take turns pounding the poor things until they bleed their treats on the ground in a sweet sacrifice. Hopefully the shards of Spongebob Square Pants will please the gods and keep our kids safe, sound, and in school another year. A storm of dust, limbs and flailing bodies squirm to the treasure and even Kevin burrows his way in as I starting worrying about child suffocation again. No use shouting now. Not in any language. When it’s over, all that’s left is a carcass of wires, confetti, and spilled Nirvana. I think about the kids, feasting on their unwrapped treats and not fully comprehending the real gift they’ve been given to be here. It’s a gift that Kevin and so many others don’t get. I can only hope their occasional disregard for my authority, passion, and recklessness can be shaped and aimed at defying the incredible odds they face. They will need it. This country needs them. For now, I just ask them to please share. Another successful Día del Niño in the books. 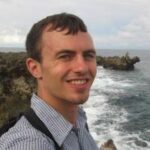 Ryan Hebel (SMBS 4th Grade) is on the third round of his Santa Monica trilogy. He's hoping it turns out more like "Return of the Jedi" than "Rush Hour 3."

Ryan grew up in small-town Wisconsin and went to UW-Madison to study political science and journalism. He dabbled in TV news for a few years, but found his passion in teaching through BECA. The decision was a life-changer.

Over the past two years he's worked with amazing kids, teachers, and families. When he's in class he likes to keep things fresh and fun by writing raps and songs for his students to learn, and feeding off their energy and enthusiasm. When he's out of school his favorite thing is exploring hidden nooks of Honduras on a chicken bus with his tattered backpack. That might mean practicing his Punta dancing on some Garifuna beach, or picking coffee in the mountains. He is grateful for the opportunity to spend another year discovering new people, ideas and adventures in Honduras.